To look up the last investment in a new BOPP film production line in Vietnam, one has to go back a long time. Based on this fact and due to the promising demand situation in Vietnam as well as in the Asia Pacific region, Vietnamese Plastic Chemicals Joint-stock Company (also known as Plaschem) realized the idea to be the first company to establish a brand-new, ultra-modern BOPP factory. 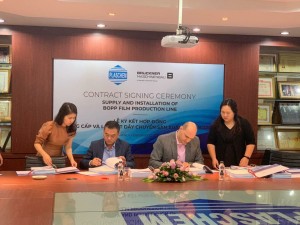 But a good idea is nothing without a good concept. Together with their partner Brückner Maschinenbau, Plaschem analyzed the situation very carefully.d brand owners’ needs and the overall feasibility of an investment of this magnitude: all that had to be taken into consideration.

Mr. Bui To Minh, General Director of Plaschem, says: „When we searched for a partner for this project, we deliberately looked for more than just a machine supplier. As being a newcomer in the BOPP film industry, we decided for Brückner Maschinenbau as we are convinced to get the best state-of-the-art machine and the best overall support – starting from the first discussion over the full lifetime of the line. Furthermore, we decided to include also the peripheral and downstream equipment into the design, layout and scope of supply of Brückner. With this new BOPP line, we are in the position to produce highest quality film which shall boost our sales in Vietnam, where since many years no new line was installed.”